How Safe is America’s Drinking Wate

How Safe is America’s Drinking Wate

One can generalize that America’s drinking water is very safe.  However, vast swathes of land that are home to millions of people in America are actually at risk from polluted drinking water. In July this year, the Michigan department of environmental quality released the statement that the PFAS level in a water reservoir in the city was measured at 1400 PPT. The acceptable limit is 70 PPT.

Residents of Parchment were forced to move to bottled water for cooking, drinking, and also for preparing infant formulas. These chemicals that are beginning to turn up in the city’s waters have been used for many years on military bases and at industrial zones. They find use in the manufacture of consumer items, such as food packages water resistant clothing, non-stick cookware, and insulation foams.

The good news is that the chemicals are not manufactured in America. However, these chemicals are quite pervasive and are all around us. Once ingested, these chemicals can stay in the body for up to nine years. These chemicals may have an extremely harmful effect on embryos, and the effects may persist well into adulthood. Nursing mothers may pass on the harmful chemicals to young ones. 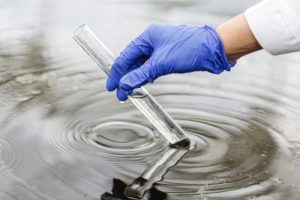 Exeter, New Hampshire; Horsham, Pennsylvania; Colorado Springs, Colorado; and Fayetteville, North Carolina are some of the communities in America that are affected by contaminated water. In Fayetteville, residents have found private drinking water wells contaminated by the chemical GenX, a second-generation PFAS.

Apart from the immediate health concerns, agencies such as the EPA are worried about the long-term health impacts of sustained exposure to these chemicals. Another worrying point is that the more agencies are beginning to test and monitor water sources, the more is the number of contaminated sources that are being discovered. The problem appears to be very pervasive.

The reason for such pervasiveness is the widespread use of PFAS, as mentioned above. PFAS can be found in synthetic carpets, in packaged foods, and in foods prepared in non-stick pans. The chief mode of exposure to these chemicals is by consuming them, in food or water.

As of now, the residents of Parchment have been advised to continue with tap water for bathing and washing purposes. Households are also installing reverse osmosis filters that can trap PFAS particles and reduce the PFAS levels to below those cited as acceptable by the EPA.

Even after eliminating PFAS from the city’s drinking supplies, the effort may still not quite restore the people’s faith in the drinking waters of Parchment. Doubts will persist.

Ever since the PFAS issue broke out in Parchment, property sales have taken a hit. People are less eager to move into town.

The entire issue about chemical contamination of underground and overground drinking water supplies has taken time to happen. Till the 1970s, the federal government was hardly involved in the issue of monitoring drinking water quality across states. State laws were often flouted by vested interests.

National oversight of the number and amount of contaminants allowed in drinking waters first happened after the Safe Drinking Water Act was passed in 1974 and the U.S Environmental Protection Agency (EPA) was formed.

Even after 40 years and diligent implementation of regulations, citizens still face dangers from polluted waters. In 2014, Flint, Michigan was exposed to leached lead from water pipes. While, the lead amounts have been restored to acceptable levels, the residents have been instructed to continue with bottled water till 2020.

In 2009, the EPA stated that threats to drinking waters are on the rise, and these include many less familiar chemicals. Many of these chemicals are not covered by government norms. The Environmental Working Group (EWG), in 2010, released a disturbing report stating that chromium 6, a potential carcinogen, is present in water supplies of around 35 cities across the U.S. that are home to more than 200 million people.

A 2016 study by the Harvard University found unacceptable levels of polyfluoroalkyl and perfluoroalkyl substances (PFASs) in drinking water being supplied to 6 million Americans.

The Safe Drinking Waters Act covers 90 contaminants. 8,000 chemicals are monitored by the EPA. Since 2000, no new chemicals have been added to the list of monitored ones.

Before water is delivered to homes, it is cleaned using a 5-step process –

Coagulation – The water is made to pass through a mix of alum and other chemicals that attracts particulate matter and forms clumps.

Sedimentation – The clumps sink to the bottom of the water containers, and the cleaner water flows forward.

Filtration – The water flows through filters that trap smaller particles, including microscopic creatures. The filters are gravity-driven and are often made of charcoal, sand, stone, and gravel.

Disinfection – Chlorine is the most popular disinfectant added to the water to eliminate microbes.

Storage – After disinfecting, the water is placed in storage reservoirs from where it is pumped to homes.

While these steps can help eliminate almost all conventional pollutants, they are still inadequate against new-age chemicals that can cause damage even in extremely low quantities.

Currently, the EPA regulations cover five types of pollutants. These include microbes such as bacteria and viruses. Disinfectants and their byproducts are another concern. Chlorine, bromates, and haloacetic acids are chemicals used to cleanse water off microbes. An excess of chemicals can cause stomach irritation, kidney problems, and even neurological issues in children. Organic chemicals comprise the most populated category of contaminants regulated by the EPA. The final category is radiation. It can lead to malignancies. Natural deposits of heavy metals, such as radium, uranium, etc. can pollute waters.